Home News A doctor from Manipur Received Japanese Honour
Other

Japan has conferred the Order of the Rising Sun, Gold and Silver Rays decoration on Manipur physician and former president of state tourism forum, Dr Thangjam Dhabali Singh, to honour his contribution to strengthening ties between Japan and India, and Japan and Manipur. He was honoured during a simple event in Imphal on Tuesday.

“We appreciate that Dr Singh has earnestly dedicated himself to deepening the bonds between Japan and Manipur. During his tenure from 2012 to 2017 as president of Manipur Tourism Forum (MTF), Japan and Manipur rediscovered one another and got even closer, going beyond our historical ties,” said a press release from Japanese ambassador Suzuki Satoshi, read out by Japanese embassy counsellor Kajita Takuma.

Dr Dhabali was involved in organising the commemoration of the 70th anniversary of the Battle of Imphal in 2014, an occasion attended by dignitaries from Japan, Britain and Australia.

Later with support from the Sasakawa Peace Foundation and therefore the Nippon Foundation of Japan, the Imphal Peace Movement (IPM) was launched on June 22 in 2019, which, Ambassador of Japan termed as ‘another symbolic achievement’. The MTF played a crucial role in giving shape to IPM during Dr Dhabali’s tenure as its president. 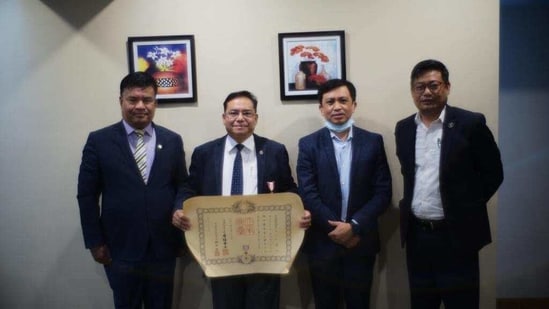 The decoration was constituted by Japanese Emperor Meiji in 1875. it's one among the very best orders conferred within the name of his majesty the emperor, by the govt of Japan to non-military and apolitical persons, who have made distinguished achievements in diplomacy, promotion of Japanese culture, achievements in their respective field, development in welfare or preservation of the environment.

Dr Dhabali thanked everyone particularly the members of MTF and therefore the Second war Imphal Campaign Foundation (ICF) who had been instrumental in providing a particular direction to the promotion of tourism between the 2 countries.

“Words truly fail to precise how humbled I pity the acknowledgement of what I still concede to be a little contribution. I do know I still have much to find out but with the continued support and encouragement from my colleagues from MTF and ICF, I'm sure we'll be ready to explore more areas to strengthen our friendship with Japan,” Dr Dhabali said after receiving the honour.