Having traversed challenging and adventurous roads three, women bikers on a 7-day-tour across the North East, arrived in Kohima this afternoon.

They include Nirmali Nath from Assam, Onen Nenty from Nagaland and Rosalynn Lushai from Mizoram. Their tour was formally flagged off on April 3 at Guwahati as they geared themselves to ride across the region under the theme ‘Breaking Stereotype and Redefining North East.’ With Nagaland covered, they're now headed to their last destination Itanagar in Arunachal Pradesh.

In Kohima, they were accorded a warm felicitation by KK Motor Kohima, Department of Tourism, Nagaland Tourism Association (NTA) and biker Neitho Khamo at The Heritage. Their shared love for riding bikes has birthed the concept of the North East Tour as they still explore the exquisite great thing about the region. Beyond that, Onen Nenty said, “we want to point out that ladies in North East aren't just sitting reception. We aren't just women who are comfortable within the kitchen, we would like to think beyond that, we are beginning of our comfort zones.” 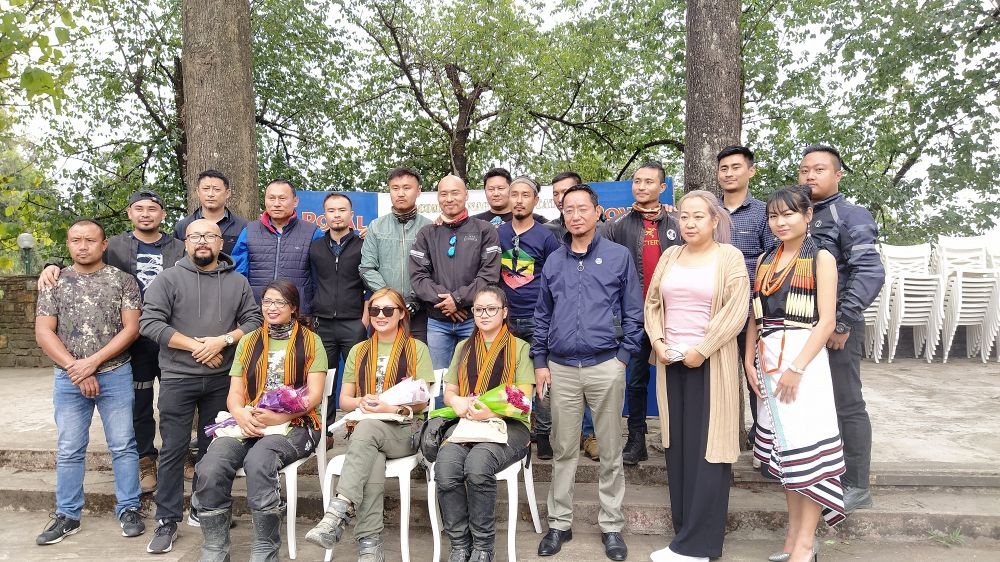 Describing themselves as ‘crazy people, she expressed that “if you would like to realize extraordinarily, you've got to be crazy.” it's for the primary time that ladies riders are beginning together during this manner whilst she noted that “we are contributing to our society, our North East and that we also want to point out that North East women aren't just sitting reception.

Recalling the experience of the states they need to be covered thus far, she said they were greeted with the nice and cosy hospitality of the local people everywhere they went.

Nirmali Nath also echoed an equivalent sentiment while putting across that “I get goosebumps whenever we are being received- local people giving us water, fruits, food, we got such a lot love and support from everyone with people hosting us, feeding us and giving us shelter.”

She said the roads were challenging while stating that “there are good roads, bad roads, off roads, and no roads” but nature, landscape and therefore the warmth of individuals, she added were “amazing.” “We want to point out people what's there in North East as riders representing our states and that we feel pleased with it”, she said.

Nirmali Nath from Assam and Rosalynn Lushai have both travelled quite 1 lakh kilometres on bikes within the past while Onen Nenty previously undertook a solo bike tour across Nagaland.

Veyielo Doula, Deputy Director for Tourism congratulated the three bikers on undertaking the tour while remarking that it's very challenging and tough to ride through rugged roads within the North East. He lauded them for displaying enthusiasm and courage in spreading the message of affection and peace among the seven states and further encouraged them to still do that noble job. “As ambassadors of tourism in North East, leave and spread the love and wonder of the region to India”, he added.

Also speaking on the occasion, Vincent Belho said the feminine bikers are truly the ambassadors of tourism in the North Malay Archipelago. He called upon them to still showcase to the planet that Nagaland and therefore the Northeast are a hot tourist destination.