Rajiv Gandhi University (RGU), the lone central university of the state, celebrated its 38th foundation day at its Rono Hills campus with a series of events on Thursday.

Governor and Chief Rector of RGU, BD Mishra presided over the programme. Chief Minister Pema Khandu was the chief guest of the event.

In his opening remarks, RGU Vice-Chancellor Prof Saket Kushwaha highlighted the university’s success stories in the recent past. He also highlighted the successful induction of smart classrooms for the departments.

Another laudable initiative that the vice-chancellor announced was the financial assistant of Rs 2,000 per year as a health supplement to all its contractual staffers. Prof Kushwaha also highlighted several initiatives of the university to facilitate the teachers, like the promotion of 35 assistant professors from level 10 to 11 and from 11 to 12.

Also Read: Class 10 and Class 12 Exams in Tripura to Start From May 10

He shared his vision of seeing the university as one of the top universities of the country, and added that “this calls for all teachers, students and administrators to work hard and achieve greatness not just for the university but in their personal lives too.”
Delivering the foundation day lecture, NEHU (Shillong) Vice-Chancellor Prof SK Srivastava shared his experiences and ideas on the roadmap to success of a university. He stressed the importance of getting high-quality research papers published in quality journals.
Prof Srivastava said that “the teaching faculty should explore the various policy research and its opportunities.” 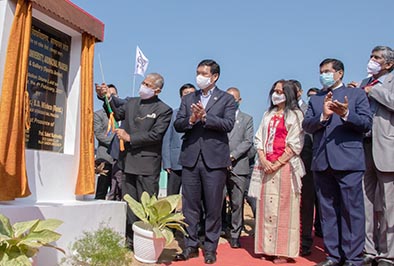 Chief Minister Pema Khandu in his address applauded RGU for combating the Covid-19 challenges and successfully conducting all its academic activities. He also congratulated all the stakeholders of the university over RGU’s securing the second rank in the UGC rankings.

“To maintain the position, the university will have to keep working hard,” he said and added that the state government is ready to extend all possible help to the university.

He spoke about how the state government has been receiving support from the university in terms of “knowledge-sharing in the form of MoUs and other policymaking processes, the recent understanding of developing a cultural policy of the state being one of the many.”

Khandu drew attention to the fact that various constructive steps are being taken up the government to bring quality education. “Teachers’ recruitment process is very fair in the state and much emphasis is being given as the new education policy is going to be implemented.”

The governor in his presidential address praised the VC “for creating an overall conducive environment in the university and bringing many achievements in a short period.” He also credited the faculty members, students and staffers for their good work and vision.

Mishra advised the university to implement the new education policy in letter and spirit.

“Teachers should be genuine and work with utmost sincerity. A student should not be taught merely for a degree but to impart knowledge and work for the welfare of the society and its progress,” he said.

RGU Registrar Dr NT Rikam described the day as “historic, as it is not only marked by the foundation day lecture but also the initiation of many important infrastructural facilities.”

Earlier, the governor laid the foundation stone of a rostrum and a viewing gallery at the university’s sports arena, and also unveiled the newly renovated ‘Wall of Heroes’. Khandu unveiled the university’s signage and laid the foundation stone of the student activity centre.
The governor felicitated the members of the RGU health centre for their immense contribution in handling the pandemic. The university also honoured the employees who would be retiring in the current academic year.

Another highlight of the event was the handing over of ‘letters of award’ of laptops as a partial component of seed money grant by the governor and the CM to three faculty members. The grant was initiated by Prof Kushwaha to promote and encourage excellence in research activities at the university.