With the birth of every girl child, a new hope is born. Nurture that hope with equality by recognising their rights and problems, provide education and health amenities and watch them make the world a better place.

In India, on every January 24, National Girl Child Day is celebrated as an initiative of the Ministry of Women and Child Development.

The initiative came into existence in 2008 and the objective of celebrating the day is to highlight the inequalities faced by girls in the country.

The government along with the state administration organises awareness campaigns under Beti Bachao, Beti Padhao (Save the girl child, Educate the girl child) schemes.

According to a government press release, National Girl Child day 2021 is being celebrated across the country to raise awareness on the issue of the declining Child Sex Ratio (CSR). The celebrations will also mark the anniversary of Beti Bachao, Beti Padhao (BBBP) scheme.

Meanwhile, women and girls of India have time and again proved that they have what it takes to make the nation of billions proud.

Here's the list of a few achievers of Assam who defied all odds and became an inspiration.

Also Read: The Right to Vote Celebrations in Nagaland 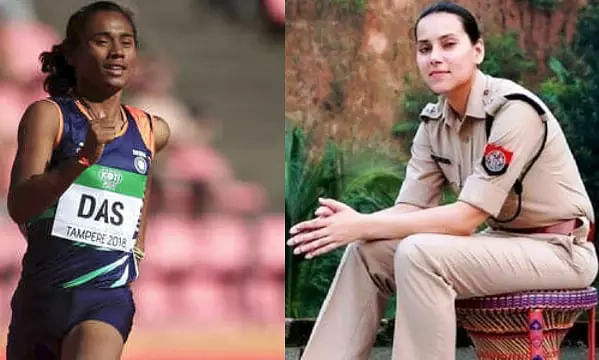 Coming from a very humble background, Hima became the first-ever Indian athlete to win gold at the IAAF World Under 20 Athletics Championship. She went on to win gold and silver medals at the Asian Games held in Jakarta last year. The 21-year-old Indian athlete holds the current Indian national record in 400 meters.

Known as the Iron lady of Assam, Sanjukta Parashar is the first woman to be have been appointed as an IPS officer in Assam. She has arrested over 64 militants and taken down 16 of them. She has also seized tonnes of arms and ammunition. Sanjukta is known to be a dedicated and courageous officer, best known for fighting terrorism and corruption.

In 1998, Lakhimi Baruah started a cooperative bank for women – the Konoklota Mahila Urban Cooperative Bank in Jorhat, Assam. The bank is for the underprivileged women in the Northeast. The bank, which has only female employees, was started with an initial seed capital of Rs 8 lakh. KMUCB currently has more than 34,000 accounts with working capital of over Rs 13 crore.

Rima Das is an Indian filmmaker. She is known for her film, Village Rockstars (2017), which won several national and international awards.

The film—written, directed, edited, and produced by Das—was India's official entry for the 90th Academy Awards in the Best Foreign Language Film category.

The film, chosen out of 28 other entries in India, is also the first Assamese film to be submitted for Oscar consideration. She won India's National Award for Best Film and Best Editor.